Chiefs Counted Out Before Season Begins

The VanPelt family with Arrowman, the first Chiefs fan inducted into the Pro Football Hall of Fame.

Red X Treme was one of the FANatics on hand for the Red Friday Pep Rally on Sept. 18.

I am proud to say I am a diehard Kansas City Chiefs fan. They are my team and I will stick with them through anything. Whether they win or lose, there is no other team for which I want to cheer. So I wish people would just stop counting them out when the season has just begun.

There was no “constructive” criticism. There was just criticism and, as it turned out, most of it was wrong.

Here are some of the choice statements the announcers made in just the first 16 minutes of play:

I know this will most likely be a rough year for the Chiefs. But if there is one thing I cannot tolerate, it is being counted out before the game (and, in this case, the season) has begun. People who count others out like this tend to underestimate their opponents. Surprises lurk in underestimation.

The Chiefs did lose the season opener to the Ravens by a score of 38-24, but I was on the edge of my seat with just five minutes remaining as the Chiefs tied the game at 24. Despite an admittedly sluggish start, Croyle threw for a respectable 177 yards and the two aforementioned touchdowns.

I just hope some mouths were forced shut by the Chiefs decent performance in the season opener. If not, I will probably just have to get used to muting the game and providing some positive, constructive commentary of my own.

Good luck, Chiefs. Play well. There are many of us who believe. Just push your mute button too, and you will hear us. 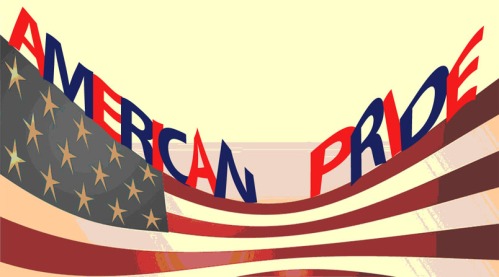 My Country, My Land, My Home -- Illustration by VP

Happy Fourth of July to all my fellow Americans and everyone else, for that matter. We all can join in this celebration. I am so proud to be an American.

I know America has its flaws, but what country doesn’t. When all is said and done — when the pros and cons have been tallied — America comes out all right! It is a great nation. It is my country, my land, my home.

There is always room for improvement, but that is up to us! The great thing about America is we have the right and the power to improve it. Use your voice; make yourself be heard.

Below, you will find many people doing just that. Enjoy this “Ode to America,” brought to you by Vantage Point Productions. If you did not get to be a part of this yet, but would like to have your comments included, just send them to me and I will add them, or you can just post your thoughts on here as a comment!

Bobby Rabinowitz said, “People, today is not just a day to celebrate Independence Day, but to celebrate those who keep this day going on. God bless those  who have died doing so and those who are continuing to fight for us now. I salute all those people.“

Tim D. said, “July 4th makes you think more about the past than the present. A time when being American filled you with pride, not arrogance. That’s the America of today.

The America of yesteryear was a group of hard working refugees pursuing a dream they couldn’t have before. That dream was life, liberty and the pursuit of happiness. They did it as honestly as possible, despite the hiccups, and our county’s mistakes in its youth. I view our country as in its toddler stage now, the terrible two…..hundreds. We are forcing our opinions and way of life on a world that is older than ours. I’m not saying the other countries don’t have their mistakes, they do, but leading by example is better than coercion with a weapon in hand.

I think America needs to recapture it’s *Dream* — a government made for the people by the people. A country that instills pride, from earning it through honesty, perseverance and common sense. Dreams don’t need to be stolen from the people. Capturing a dream now is like capturing lightning, you need to be in the right place at the right time, with the right tools and you hope someone doesn’t stop you along the way. The dreams need to be nurtured. Our country needs to be given back to us, the descendants of what so many people through our country’s history have fought for.

Can you identify a leader that’s not a millionaire? Our laws get made by the rich for the benefit of the rich. Don’t believe me, ask your congressman why corporate entities have more rights than a human being does. We live in a capitalist society, money rules, a near aristocracy where money makes you more respected. Respect should be earned by what you do, not by a system that’s not even backed by gold anymore. With our people, so goes our country, and we push this same agenda elsewhere, not for democracy, but to further trade.

I want the America our forefathers hoped for. Their actions weren’t the best, but the idea was right. I want our source of national pride to regain it’s luster. I want Independence Day to mean something besides a day to blow off fireworks. I want the dreams of our people to see reality, rather than isolated in corners of their mind by too many obstacles by those that don’t want to share their good fortune.

Can I have that?“

Jason Patrick said, “God and country, the great blessed America… A nation like no other, loved, feared and respected by all. Given unmatched strength and honor from God. A nation that rebuilds, reshapes, and refines waste and poverty. A nation that has survived through more than its fair share of bleak times. And a nation, that will survive forever more. A nation of its people. God bless America.“

Rick Bross said, “America is the greatest country on Earth. We have the greatest productive capacity on the face of the planet, and when I go to sleep at night, I know that I have men shedding blood, sweat and tears for my freedom. On any given day, I would risk my life for the soldiers in battle, as they do for me. They are not only fighting for freedom, they are fighting for the great American Dream. A Dream that foretells that my children will have a better life then I have, and so on. That is the most valuable thing America has.

Being an American is more than just living day to day supporting the economy. I believe while I am living here in this great nation, I should devote everything I can for the community, everything for those less fortunate and everything for the soldiers living in poverty. For my country, I will remain pure and godly, so I will be able to serve my country by any means necessary, as it serves me throughout every day of my life, I will fight for my right to live free, and fight for others who can’t fight for themselves, and I will donate a good portion of any items created on my property.

The thing I love about being American is the security in knowing that I will not wake up to fire, destruction, and the whistling of bombs which so many children face around the world every day. This is why I believe America is the greatest country on the face of the planet, and I know I love this nation more then I love my own being.“

Brianna Velez said, “American soldiers are the gears to this contraption we call America, and sometimes the gears break or rust, so that is why we citizens are the ones who must supply the love to oil them and keep them moving strong to keep us living long.”

Jessica Smith said, “America is a great country because I am free. This country is an opportunity to make your dreams come true, where you’re not held back by dictators that control your every move. Here you can speak your mind and be your own person, your own individual. There is no slavery, and everyone has to be treated equally and cannot be judged by their skin color or religion.You have a chance here to be whoever you choose to be and can choose who you want to spend your life with and not be forced. All of us people make up this divine country. We are America.“

Miles O’Neal said, “The USA is in a mid-life crisis. She’s kind of burnt out on who she’s been, but she’s not quite sure who she wants to be. So many people are tugging her in different directions; her people are so polarized into groups who often forget how much they have in common worrying about what they don’t.

When families come together on birthdays, it can be a joyous or miserable occasion. I urge my fellow citizens and wannabes to stop and reflect on all the good, and the things we have in common, and pull together rather then squabble. We can disagree civilly and remain strong, and help the USA find her way again.

Despite the problems, there’s still an awful lot of good here, and there is nowhere I would rather live. Happy birthday to us all. God bless America. (That’s a prayer, by the way, not a political statement, test of citizenship, or anything else! Feel free to ignore it if you disagree, just as I am free to ignore what others say when I disagree. That’s one of the reasons I prefer to live here– freedom of speech, freedom to ignore speech.)“

Emily Wescoat said, “I think that it is amazing that regular people like you and I would fight for us,  put their lives on the line for us, when we really didn’t do anything for them to repay us back. I’m proud to be an American because at least I know I’m free.”

Katie Thompson said, “I feel that being an American is a great privilege and offers many advantages. We have such great opportunities over here that many people couldn’t ever imagine in some countries. We have so many rights and so much freedom, and it is truly great to think that on this very day, America finally gained independence from Great Britain. Without that day, we might have never been living like we are this very second. I am very proud to say I’m an American and that this is my country.“ (:

James Henderson said, “To be an American, hmmm… For one, being free to make mistakes and have a second chance to fix them. To live in a country known for its environment of opportunity is pretty amazing. When I look into history, I see where people before me laid down their lives for the beautiful country I live in. I am truly proud to live in a country where we have an African-American president. We are ethnicly diverse. Although we are flawed, it is still a wonderful country.“

“America, protector of the meek.
Ferocious defender of liberty.
Foes cower before Her freedom.“

“America is the beat of my heart.
A beat of Pride.
And a beat of Glory.“

my shelter from tyranny.

and led by the righteous in pursuit of liberty.“

“‘Give me liberty or give me death’… words spoken from a true American heart.“

Tim D. said, “Happy 4th of July folks. I think the biggest firecrackers are the people I know.“

“America is having a birthday party and we are all invited!“

Happy Fourth of July everyone! God Bless You All!

A Special Thank You to Bobby Rabinowitz for giving me this idea and to Jason Patrick for all of his wonderful reporting help! Great job, guys!